Bob Pierce
Nashville, Tennessee
A life-long Nashvillian, Bob Pierce began shooting trap in 1981. In the 27 years since then, he has registered 165,550 targets. Bob led the multi-year effort to search for and ultimately obtain the present TSTA home grounds in Nashville, for which he has always graciously shared the credit He holds the singular distinction of being a member of a large group of members who in 1987 simultaneously fired at the last target at the Nashville Gun Club's former location near the airport; then in 1995 he broke the first trap target thrown at the new club, this time shooting alone. He is well known for his tireless service as a board member of the Nashville Gun Club and the TSTA, including terms as president, vice president, secretary, treasurer and historian. Prior to computerized score printouts, he and wife Kay spent several years posting scores manually during the state shoot at Henry Horton Park.
After owning an electronic repair business for 20 years, he entered the commercial real estate business in 1993. In 1998 he and a partner formed Investors Equity Holdings, a real estate investment company located in Brentwood.
Bob is a graduate of David Lipscomb University, as are all three of his and Kay's children, including shooter son Bobby. Bob and Kay are expecting their fifth grandchild in early 2009. 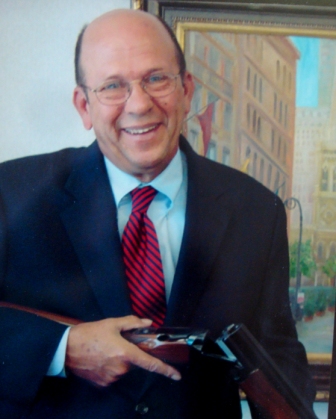