John Cima
Memphis, Tennessee
Memphis native John Cima was born in 1942. He graduated from Memphis State University (now University of Memphis) in 1965 and from the University Of Tennessee College Of Dentistry in 1969. He has practiced dentistry in Somerville for 37 years. In 1966 he married Paula Morton. They have a daughter, Catherine Mask, and a granddaughter.
A 32-year member of the Board of Directors of the TSTA, he was elected President in 197^79 and again in 1996-97. He was honored as Tennessee Trapshooter of the Year in 1994. He has saved the TSTA as chairman of the classification committee and audit committee, and contributes his time and energy to the TSTA in countless other ways.
John began registered trapshooting in 1973 at the Memphis Gun Club at its ApplIng Road location. In the 1982 Southern Zone Shoot in Spartanburg South Carolina, he won the Zone Handicap Championship with 100 straight. In other years he has tied for the Tennessee Singles Championship and won many trophies at state shoots in Tennessee, Arkansas, Mississippi and Louisiana.
John was instrumental in the creation and founding of the Tennessee Trapshooting Hall of Fame. 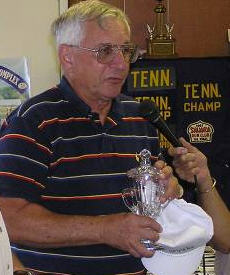