John Noel, Sr.
1888 - 1939
Nashville, Tennessee
Born in Nashville on February 26, 1888, he married Frances Boensch in 1914. They had one son - John H. Noel, Jr. John studied law at Yale after graduating from Vanderbilt. He practiced law in Nashville until retiring in 1915 to assume duties as trustee for the estate of O. F. Noel, Sr.
John won the Class Singles at the Grand American in 1921 with 99X100. He was the Grand American 1926 International Champ with 97X100.
At the Tennessee State Shoots he was Singles Champion in 1921, 1936 and 1939. He was Doubles Champ in 1925 and 1937. He also
was the All Around Champion in 192land 1922. John was the Tennessee State Champion in 1924, 1936 and in 1939. At the age of 51 in 1939 he attended the Kentucky State Shoot at Paris, in July, and had a heart attack. He died three months later.
The Johnny Noel-Billy LeCompte Memorial Trophy (a 15" silver punch bowl) was first awarded in 1941 in honor of these two shooters. It was awarded to the shooter with the highest score in the main handicap - regardless of state of residence.
In 1906 at the Rocky Mountain Handicap, in Denver, John became a registered trap shooter.
He reached his zenith in 1924 when he was named a member of the U. S. Olympic Team, and competed with the winning American Team in Paris, France.
His high attainment as an expert shot was reached despite having lost one hand and the other being crippled, both through accidents with guns.
A gun exploded in his hand causing the removal of part of the fingers of the right hand. Later, a gun was discharged accidentally as he climbed a fence on a hunting trip, tearing away his left hand.
Although greatly handicapped by having an artificial hand, John Noel was one of the South's most widely known shooters. John attended tournaments in various parts of the country and won many honors. 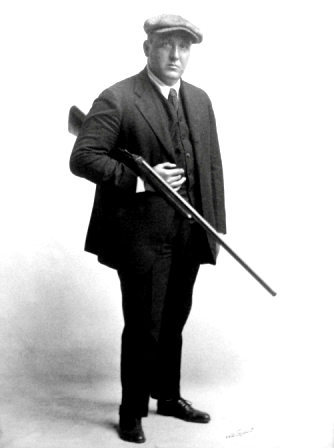