L. E. Stone
​April 7, 1920 - April 1, 2012
Knoxville, Tennessee
Born in Knoxville in 1920, he married Jean Mclntosh in 1947. They have two daughters - Analee Fein and Cassie Cobleigh and four grandchildren -Vanessa, Delamain, David, and Heather Murphy -three great grandchildren -Shane, Trent, and Lindsay Murphy.
L. E. has registered 47,475 Singles, 39,200 Handicap and 24,000 Doubles. His first contact with trapshooting came through J. M. Walker, a business client, who was Secretary & Treasurer of the TSTA for many years.
He called and asked if L. E. would cashier the Smoky Mountains Shoot at the Knoxville Gun Club. L. E.'s first question was "what is trapshooting?"
L. E. went to the Club and cashiered his first shoot - with some help of course. There were only six squads at the shoot. This was the beginning of his 30 years of management of the Knoxville Gun Club. Most shooters in the pre-1978 era were acquainted with his wife, who helped him cashier, and was State Secretary and Treasurer in 74 when he was President of the State.
In his second year of shooting he won the State Handicap at Memphis, and broke a 198 in singles in the Southern Zone. This qualified him to shoot on the Team at the Grand, where he failed to load on his 175th bird, and then missed the next one.
Back then there was a drastic shortage of cashiers. Anyone could cashier the local shoots, but there was an understanding that only a well qualified, recognized cashier could handle the State Shoot. That eliminated practically everyone but the wife of a shooter that lived in Shreveport, LA. To get her services, the club had to pay his expenses also, which made it quite costly. L. E. suggested to Mr. Walker that he would be able to handle it by the next State Shoot. Mr. Walker agreed and for the next 25 years L E. cashiered shoots not only in Tennessee, but several other Southern States.
L. E. won the Grand American Senior Vet Championship in 1992. In the Southern Zone he won the Singles Championship in 1963 and the Handicap Championship in 1989. At the Tennessee State Shoot he won the 1963 Handicap Championship, the 1992 Senior Vet Thursday Handicap Championship, and the 1994 Preliminary Senior Vet Handicap.
In 1964 Mr. Walker resigned his State position because of health reasons, and then Dr. Kenneth Shoemaker worked it for one year. L. E. was then elected and continued in this office until replaced by Joe Nevins in I978. 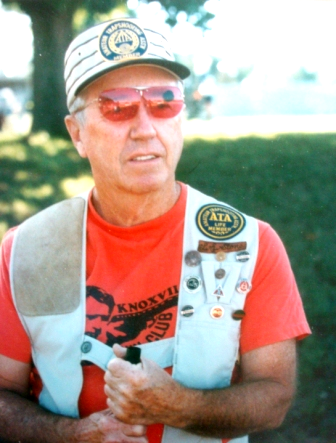