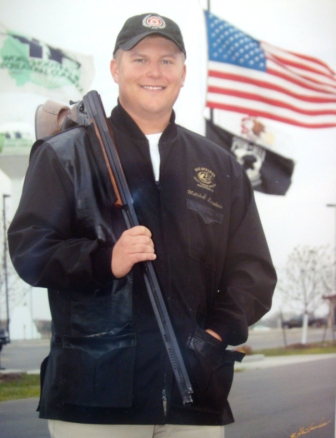 Mitchel Loveless, II
Murfreesboro, Tennessee
Mitchel Loveless, II, was born in Murfreesboro in 1981, son of Alan and Vickie Loveless. He becomes the youngest inductee in the Hall of Fame. He began shooting trap at the age of ten and in the nineteen years since then, he has shot over 227,000 registered targets. He has won the Tennessee All Around Championship four times, tying the all-time record score of 396 in 2003. He has won the Tennessee Doubles three times, twice with 100 straights. Other state wins include the Singles once, the Junior Singles once and the Sub Junior Singles four times in a row. Six times he has claimed the state High-Over All title. He has been named to six Men’s All State Teams after multiple years on the Sub Junior and Junior teams. He captured the Vandalia Handicap at the 1997 Grand American. At the 2009 Grand, he was runner-up in the Doubles Championship and placed third in the Grand American Handicap. Mitchel has made 16 Tennessee All State Teams. In addition he has won numerous events in the Southern Zone and ATA Satellite Grand Americans.
Inducted 2010