​Herb Parsons
1908 - 1959
Somerville, Tennessee
Born in Fayette County in Western Tennessee, Herb married Oneita Mongomery of Somerville, and they had two sons. For a time, his young sons Lynn and Jerry were part of his shooting exhibition.
Today, Dr. Herbert Lynn Parsons is a general surgeon, and Dr. Jerry Montgomery Parsons a horticulturist.
Herb received his first gun, a single shot Winchester .22 rifle at the age of seven. When Herb was a freshman in high school, he saw Adolph Topperwein, Winchester's great exhibition shooter, give a demonstration and was hooked. He practiced hours on end by throwing lumps of coal in the air and shooting them with a .22. Using his .22, Herb practiced shooting at thrown walnuts.
In 1929, being just old enough to vote, he was hired as a salesman by Winchester and was employed for the next thirty years.
In 1939 and 1940, Herb began touring military installations and gave 238 exhibitions to amazed soldiers, sailors, and airmen. During World War II, he served as a gunnery instructor at Williams Field, Arizona. With the end of the war he again toured our country and abroad for Winchester. He became a friend of the great, and the near-great and countless unknown hunters and shooters. Herb shot trap with Clark
Gable and Roy Rogers, and did the fancy shooting in the movie "Winchester 73" for James Stewart - and later said that "Jimmy got all the money, but I had all the fun."
Herb shot at his first Grand American in 1949, where he won industry honors in the Preliminary Handicap with a 98 from 23 yards. He had a 199 to tie Homer Clark Jr. for runner-up in the Clay Target Championship. He missed just 4 out of 600 singles to that point and had 694x700 at the end of the Preliminary Handicap the next day.
At the 1953 Grand American, Herb was AA Industry winner in the Class Singles Championship with 199 and 25 in the shoot off over Don Flewelling. His only miss was in his third sub-event, and 199 was high among industry gunners. In 1954 Herb was Industry winner in the Grand American Handicap with 92 from 25 yards, and in 1956 he was runner-up in the Clay target Championship with 198 (Cliff Doughman won with 199). He often gave exhibitions at the Grand American - but having other commitments was not able to stay and shoot the entire programs.
Herb was named to the Industry All-American first team in 1949 (teams were named for the year in which the competition took place). There was no team in 1950, but the 1951 team was for competition in 1950. He was again on the first industry team in 1951 through 1956, the second place team in 1957, and the first team again in 1958.
In 1955, when handicap yardage was increased from 25 to 27, Herb became the first industry rep to make it to the 26 (broke 99 from 25 yards on March 12, 1955 at Skyway R&GC in St. Petersburg, Fla).
As mentioned earlier, Herb was not able to shoot very many registered targets and was never the yearly average leader because of not being able to register the minimum number of targets to qualify. From 1933 - 1959, he shot 21,020 singles with a 92 average. He also shot 7,700 handicap targets with an 87 average. In doubles he shot 8,950 targets with an average of 94.
In 1956 the motion picture "Showman Shooter" was made featuring Herb's gun-magic and skillful narrative, and introduced by sportscaster Ted Husing. This remarkable chronicle of the World's Greatest Exhibition Shooter has been seen by an estimated 30 million people and is preserved on videocassettes.
Herb Parson's shooting skill was not confined to exhibition work. Many years he won the Grand American Trap Shoot's Professional Championship, and for years he was a perennial member of the Sports and Field All-American trap and skeet teams.
First, last and always, Herb was a big game and small-game hunter. He was International Duck-Calling Champion in 1949 and 1950, the National Duck-Calling Champion in 1951, and finally retired undefeated in 1952.
Although his amazing shooting skills may be remembered for decades, Herb Parsons' greatest memorial may be his influence on youngsters. He was the originator of the saying "Hunt with your boy and you'll never have to hunt for him."
It is doubtful that any other shooter of his generation touched so many people - hunters and non-hunters alike. Herb Parson was more than a brilliant shooter and crowd-pleasing showman. He was a hunter and proud to be one, and to millions of people he embodied humor, adventure, love of country, and the highest standards of personal and professional conduct.
Herb was the only shooter to accomplish the amazing feat of throwing seven clay targets into the air and breaking all seven before they hit the ground. He did this with a Winchester pump shotgun. This and his many other remarkable shots earned for him the honored title, "The World's Greatest Exhibition Shooter of Rifles and Shotguns."
Since his death in 1959, many magazine tributes have been written about him. Herb was inducted (posthumously) in 1995, to the National Trapshooting Hall of Fame in Vandalia, Ohio. In 1997, he was inducted into the Tennessee Sports Hall of Fame in Nashville, Tennessee.
His family has donated numerous firearms that are exhibited in the Cody Firearms Museum at the Buffalo Bill Historical Center, in Cody, Wyoming.
He was rarely known by his first name, Joel. Even to his family, he was "Herbert" or just "Herb". To millions of outdoorsmen he was the world's foremost ambassador of the shooting sport. 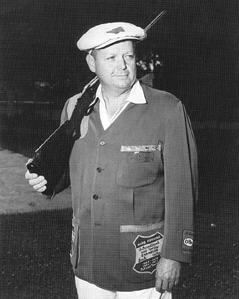