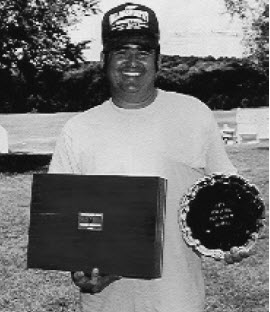 Inducted 2012
Ted Greene
- 1992​
Bolivar, Tennessee
Ted Greene's rise to the top ranks of Tennessee Shooters required a very short time. After joining the ATA in 1982, it took him only four years to reach the 27 yard line. For the next seven years, he was among the very top competitors in the state. In 1991, his last full year of shooting, he became the fourth person in history to win the Tennessee Singles Championship with a perfect 200. The same year he made the All State Team. His shooting career spanned just over ten years until his tragic death in 1992. That year the TSTA voted him the Tennessee Trapshooter of the Year posthumously. He registered a total of 95,200 targets.
A lifetime resident of Bolivar in West Tennessee, Ted was the third generation owner of Greene's Welding Shop. His wife, Diane Greene Weaver, survives him. They had two children, Angela Tootie Woods and Jennifer Pierce, and four grandchildren.